As you get ready for the end of financial year, one of the crucial tasks is to check the wage rates that will apply from 1 July.

The Fair Work Commission handed down a 3.5% wage rise to minimum wages, effective from the first full pay period on or after 1 July.

The Commission in handing down their decision concluded:

“Compared to the position at the time of the 2016–17 Review, the economic indicators now point more unequivocally to a healthy national economy and labour market. The recent data has shown strong growth in full-time employment together with a high participation rate.”

Some of the key changes to the economy they took into account:

“The level of increase we have decided upon will not lead to undue inflationary pressure and is highly unlikely to have any measurable negative impact on employment. However, such an increase will mean an improvement in the real wages for those employees who are reliant on the NMW and modern award minimum wages and, absent any negative tax transfer effects, an improvement in their living standards. We acknowledge that the compounding effect of increases over time may have a cumulative effect which is not apparent in the short term. We will continue to closely monitor this in future reviews.”

What you need to do now:

This is a great time to go back over your end of financial year payroll tasks to ensure you tidy up loose ends and have clear preparation for the new financial year. 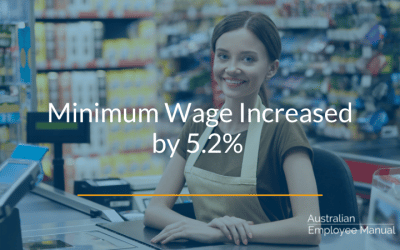 END_OF_DOCUMENT_TOKEN_TO_BE_REPLACED

We have just released a series of updates to our Instant HR Policies and Procedures Manual, New Employee Inductions, NDIS Self Managers Direct Employment HR Manual and the NDIS Support Worker Agency HR Manual. Clients with current subscriptions to these products are...